SPECIAL OFFER
Price
$850 per person
Duration
7 Days
Destination
Budapest
Travellers
40+
Book this Tour
The Castle District encompasses Castle Hill (Várhegy) – nerve centre of Budapest’s history and packed with many of the capital’s most important museums and other attractions – as well as ground-level Víziváros (Watertown). What the latter lacks in sights it makes up for in excellent restaurants, many of them around Széll Kálmán tér, a major transport hub and the centre of urban Buda.

Budapest’s beauty is not all God given; humankind has played a role in shaping this pretty face too. Architecturally, the city is a treasure trove, with enough baroque, neoclassical, Eclectic and art nouveau buildings to satisfy everyone. Overall, though, Budapest has a fin de siècle feel to it, for it was then, during the capital’s ‘golden age’ in the late 19th century, that most of what you see today was built.

The Past at Hand

They say the past is another country, but it’s always been just around the corner in Budapest. Witness the bullet holes and shrapnel pockmarks on buildings from WWII and the 1956 Uprising. There are sad reminders like the poignant Shoes on the Danube memorial, but ones, too, of hope and reconciliation – like the ‘sword’ of the former secret-police building on Andrássy út now beaten into the ‘ploughshare’ that is the House of Terror, with both sides of the story told.

There’s a lot more to Hungarian food than goulash, and it remains one of the most sophisticated styles of cooking in Europe. Magyars may exaggerate when they say that there are three essential world cuisines: French, Chinese and their own. But Budapest’s reputation as a food capital dates largely from the late 19th and the first half of the 20th century and, despite a fallow period under communism, the city is once again commanding attention. So, too, are Hungary’s excellent wines – from Eger’s complex reds and Somló’s flinty whites to honey-sweet Tokaj. 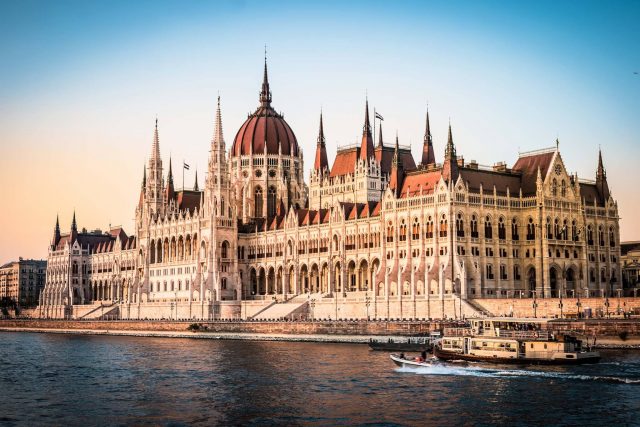 The city is blessed with an abundance of hot springs. As a result, ‘taking the waters’ has been a Budapest experience since the time of the Romans. The choice of bathhouses is generous – you can choose among Turkish-era, art nouveau and modern establishments. Some people come seeking a cure for whatever ails them, but the majority are there for fun and relaxation – though we still maintain it’s the world’s best cure for what Hungarians call a macskajaj (cat’s wail) – hangover.

Starting Fresh in the Morning

After you’ve had a substantial breakfast at your hotel or one of the cafes of Budapest, go and visit Castle District while you’re full of energy and up to walking. The district, called Várnegyed in Hungarian, is situated on a hill at the Buda end of Chain Bridge.

The whole district, which is an UNESCO World Heritage Site, reflects medieval and baroque Budapest with many fine buildings and narrow cobbled-stoned streets with footpaths winding around the hill.

Inner City Tour To see the Heart of Pest

Take the Castle bus to Deák tér to continue your Budapest-in-a day adventure in the inner city. Here the three metro lines of Budapest meet, so if you’re tired of walking, take one of the underground lines.

But if you’re still up for some strolling, keep your sightseeing on foot. You will be able to see more of the city’s beautiful buildings.

If you’ve had enough walking then take tram 2 that travels from Vágóhíd utca in district IX. to Jászai Mari tér at Margaret Bridge (best to get on at Boráros tér or at the Central Market Hall stop at Szabadság Bridge).

The tram runs along the Pest side of the Danube offering a beautiful view of the Parliament, the Castle Hill and Gellért Hill in Buda, and the Danube bridges.

If you have time do include a walk on Budapest’s new, partially pedestrianized street, the so-called New Main Street between Kálvin tér and Szabadság tér.

Stop for a taste of strudel in the First Strudel House of Pest Cafe on Október 6 utca, where you can sample this sweet Hungarian delicacy with a cup of coffee. If you don’t have much time, do only one part of the street e.g. starting from Kálvin Square along Kecskeméti utca till Egyetem tér.

This is one my favourite parts of the city centre with lovely terraced cafes, bistros and shops.

Historic Spas in Buda and Pest

Even if you’re here only for a day try to cram in a visit to one of the bath houses our city is famous for.

In the afternoon head for a spa to pamper yourself in the thermal pools and try some of the treatments and services (sauna,massage etc.).

I recommend the Széchenyi Baths in City Park, Gellért is also good and it’s more centrally located (at the foot of the Gellért Hill) than the Széchenyi, or one of the Turkish Baths: Rudas was nicely refurbished and a modernized (the rooftop jacuzzi offers a fantastic panorama)

Once called the “Queen of the Danube,” Budapest has long been the focal point of the nation and a lively cultural centre. The city straddles the Danube (Hungarian: Duna) River in the magnificent natural setting where the hills of western Hungary meet the plains stretching to the east and south. It consists of two parts, Buda and Pest, which are situated on opposite sides of the river and connected by a series of bridges. Although the city’s roots date to Roman times and even earlier, modern Budapest is essentially an outgrowth of the 19th-century empire of Austria-Hungary, when Hungary was three times larger than the present country. Hungary’s reduction in size following World War I did not prevent Budapest from becoming, after Berlin, the second largest city in central Europe. One out of five Hungarians now lives in the capital, which, as the seat of government and the centre of Hungarian transport and industry, dominates all aspects of national life. Tens of thousands of commuters converge on Budapest daily, more than half the nation’s university students attend school in the city, and about half the country’s income from foreign tourism is earned there.
The Castle District encompasses Castle Hill (Várhegy) – nerve centre of Budapest’s history and packed with many of the capital’s most important museums and other attractions – as well as ground-level Víziváros (Watertown). What the latter lacks in sights it makes up for in excellent restaurants, many of them around Széll Kálmán tér, a major transport hub and the centre of urban Buda.

Budapest’s reputation as a food capital dates largely from the late 19th and the first half of the 20th century and, despite a fallow period under communism, the city is once again commanding attention. So, too, are Hungary's excellent wines – from Eger's complex reds and Somló’s flinty whites to honey-sweet Tokaj.

City Park, at the northern end of epic Andrássy út, is the largest park in Budapest and its main entrance, Heroes’ Sq, is ringed by important museums and monuments. The streets around the park boast impressive art nouveau and Secessionist architecture. Five new museums are due to be constructed in City Park by 2019, including the Hungarian National Gallery-Ludwig Museum – the new home of the Hungarian National Gallery and the contemporary art collection from the Museum of Fine Arts, while the expanded zoo will accommodate a futuristic biodome.

To the north of Belváros is Lipótváros (Leopold Town), with the landmark Parliament facing the Danube to the west and the equally iconic Basilica of St Stephen to the east. This is prime sightseeing territory; along with those two icons you'll also discover great museums and exhibits, some lovely squares and art nouveau buildings. We’ve also included part of Terézváros (Teresa Town), named in honour of Empress Maria Theresa, in this neighbourhood. It's a busy district after dark: Budapest’s Broadway or West End is Nagymező utca in the heart of Terézváros.